We were sitting down for dinner earlier this week and I asked the boys what they wanted for Christmas. A said “I want a Blackberry”. K said “I want an iPod”. Where did my little boys and their Thomas train sets go?

At the tender age of six, A has become addicted to my Blackberry. It began innocently enough with a few games of Brickbreaker, and over the past few weeks it has grown into a full-fledged obsession.

The other day he said “Dad, can you please pass me my Blackberry?” At breakfast yesterday morning, he took the front section of the newspaper and pored over the full-page Telus ad of smartphones. He said “Blackberry Bold – that’s the one Dew has. What’s the Blackberry Storm all about? That one’s $249 – do I have that much in my piggy bank?”

What is surprising is how adept he’s become at using my phone. He was on level 12 with four lives left the other day on Brickbreaker. He has been recording voice notes, making videos, and playing music from the media player (I didn’t show him how to do any of that).

Last weekend, the boys took the Blackberry downstairs without me knowing and took 124 pictures of the living room. Even better, he took pictures of K lying spread eagle in the bathtub. It’s hard to explain to your son why putting pictures of naked boys on daddy’s Blackberry is a very very bad thing.

Some of the photos show real promise, though. Here’s a sample of their work (minus the nudes, obviously). If there’s sufficient interest, I may curate a multi-media exhibition of their work at a local artist-run centre. Stay tuned. 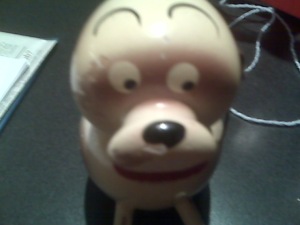 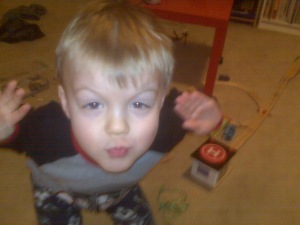 One thought on “Another Blackberry Addict”