The latest addition to my drum collection fills a couple of notable gaps – I had been looking for a good deal on a Ludwig Nickel Over Brass (NOB) drum from the 1920s, and I was also interested in trying out a 15″ snare drum.  So I was pretty excited when a drummer from Chiliwack (the town, not the band) put this Concert Dance model up for sale.

I’ve read a lot over the past few years about how great Ludwig’s NOB drums from the 1920s are – the two-piece brass shell, folded-over rims, crimped snare beds combining to create some vintage magic.  And while the coveted Black Beauty (aka De Luxe) gets most of the attention, the standard nickel models also have a lot of fans, delivering the same sound at a more modest cost.

The Concert Dance model I picked up has a 4″ x 15″ shell, with 10 lugs.  The size is a little unusual, and I was a bit wary of the shallow depth.  Perhaps owing to the slightly larger diameter, and that heavy two-piece shell, the drum has a surprising amount of depth – a bit of oomph (a technical term) that many deeper drums don’t seem to have.

I couldn’t find a lot online about this particular model as it seems to be a little more rare than drums with more standard dimensions.  The Ludwig catalogues from 1923 and 1927 have it listed on the “All-Metal Separate Tension Drum” page, along with two other 15″ models – the Theatre model (5″ x 15″) and the Band model (6.5″ x 15″).  They describe the Concert Dance as “…a size that is well-adapted for dance and theatre work.  Small, light and strong, yet sufficient volume large orchestras.” 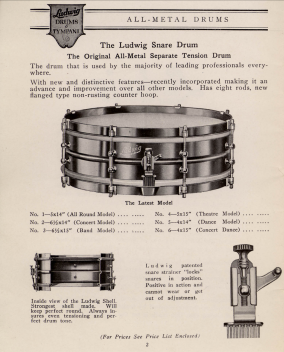 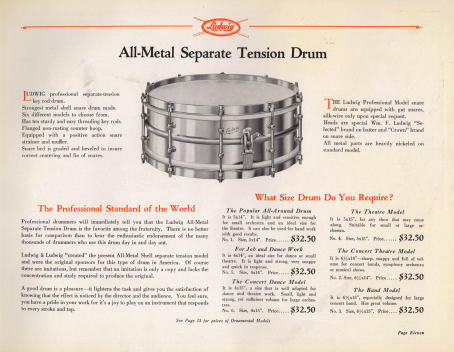 And noted drummer and teacher George Lawrence refered to it as a “Holy Grail” drum in an article he wrote a few years ago for Not So Modern Drummer.

My drum is in pretty good condition for a 95 year-old instrument, with the original professional strainer still working smoothly.  The shell has a bit of wear, but little in the way of dents or scratches.  The top clips have been replaced with modern versions, but the previous owner sent along all the original brass clips.  There is a small hole added by the vent hole (probably for a muffler at some point), but it’s hardly noticeable.  If I look half as good when I approach the century mark, I’ll be lucky. 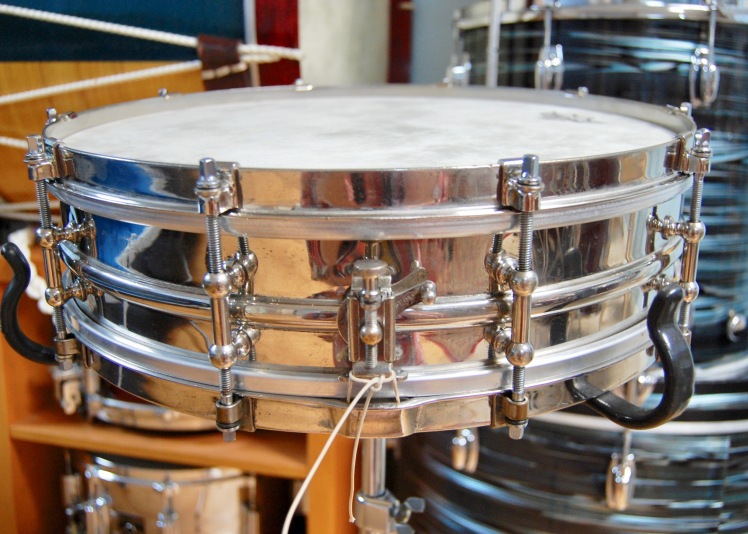