When I first moved to Ottawa, the words “Meech Lake” brought to mind two things: the 1987 negotiations with Mulroney and the ten provinces to amend the Constitution, and the fabled nude beach that existed somewhere along its shores. I’ve always been amused by the juxtaposition of naked naturalists frolicking in the water while politicians debated the future of our country just down the way.

In recent years, I’ve gone to Meech Lake many times, and have run into neither politicians nor nudists (nor nude politicians, for that matter). While I prefer the swimming at Lac Philippe and Lac la Peche, the trails at Meech Lake are easily accessible and extremely pretty, especially at this time of year. So, on a cool October morning, I decided to take the boys for a walk on the trail with the hope of making it to the ruins of Thomas Wilson’s carbide mill.

Alas, A and K did not share my enthusiasm for a walk through the woods. Within the first five minutes, concerns were raised about the temperature (too cold), the trail (too steep, too muddy), and potential dangers (wild animals, lava, etc). After considerable negotiation, I convinced them to at least do part of the trail and then we would reassess our plans.

We made it as far as the bridge where Meech Lake empties into Little Meech Lake. The boys were suitably impressed by the clear water and beautiful view, and we spent a bit of time scrambling over the rocks. That was as far as we made it, though – the mill will have to wait for the next hike. On the positive side, the boys did stand still long enough for a few nice photos.

A & K on their own little island. A said “This feels like home to me.”

A admiring the changing leaves across the lake.

It’s so hard to get them to actually stand still and smile together long enough to take a decent picture – this is my new favourite. 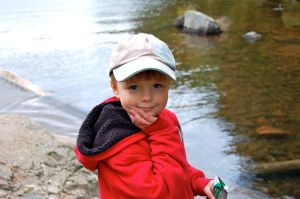 2 thoughts on “Meech Lake With The Boys”