One of the surprising things I learned as I started to read about collecting vintage drums is how much people like the plain old Ludwig Acrolite.  That staple of high school music programs and community bands seems to be considered a must-have in any collection.

The reasons they’re so desirable are pretty straight forward – they sound really good, and they’re really cheap.  Ludwig has sold thousands of them over the past 50 years, and they are easy to find on eBay, garage sales, flea markets, etc.

Ludwig first started selling the Acrolite in 1962 (dimpled shell that some consider a prototype) and 1963 (smooth shell).  Those early catalogues referred to it as a student drum and played up the revolutionary light-weight aluminum (Ludalloy) shell, eight lugs, triple-flanged hoops.  It was during that period that Ludwig also stopped using brass shells for the Supraphonic line and went with chrome over aluminum instead (of course, a few chrome over brass drums showed up in subsequent years as I mentioned in my last post.)

So as a first step in buying vintage drums, I decided to look for a 1960s Acrolite.  I much prefer the shiny anodized shell of that period to the dull powder-coated versions that came later, and I’m a sucker for the baseball bat style muffler, the P-83 strainer, keystone badge, etc.

It didn’t take long to find one on eBay, and I lucked out on a beautiful Acrolite from a seller in Nova Scotia.  Made in November 1968, it also came with a molded plastic case and vintage snare stand.  I’m pretty sure everything about it is original, including the Weather Master heads and the snare wires.  At only $200, it was an easy decision. 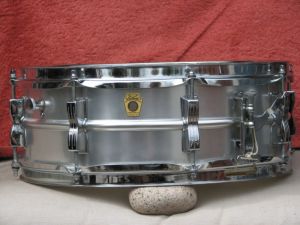 Photo from the eBay listing. I liked the red backdrop and elegant use of the stone.

Aside from a few small scratches, it looks practically brand new. Not bad for a 46 year-old drum.

One thought on “1968 Ludwig Acrolite”