Since that time, I’ve been looking on-line pretty regularly for other CoP marimbas to show up on eBay.  In January, a 3.5 octave model popped up at an antique store in Wisconsin.  Bidding started at $0.99 and rose gradually over the week until nearly tripling in the final hour to end up at $1,799.  Little information was given about how it ended up there (estate sale?), but it looked like it was in pretty good condition.  Unfortunately, the front brass plate is missing, so no idea who the original owner was or what serial number it is.

The brass, frame and keys look to be in great condition.  Painful to see the incidentals set up like that, though.

Then just a couple of weeks ago, a 4.5 octave CoP marimba appeared on eBay.  While Deagan made 75 of the 3.5 octave models, only 25 of the 4.5 octave versions were made, so I was pretty excited to see one for sale.  The seller provided some interesting details about the instrument:

I got it and the massive original packing cases (see photos) from an original member of the orchestra back in the 1960s when I was a student of Jim Salmon at the University of Michigan. His name was Carl Bailey, an undertaker in Huntington, Indiana. He, his sister, his parents, and I believe some cousins or aunts and uncles were all in the group.

He had 2 World’s Fairs, 2 King Georges, a couple of 1920s xylorimbas all set up in the basement of the funeral home when I walked in. Truly a once-in-a-lifetime moment! I tried them all, and picked the best instrument of the 4 marimbas.

That’s a pretty great story – it would have been incredible to see those great instruments all gathered together in the basement of a funeral home.  As with the previous marimba, the front brass plate is missing – the original owner’s mother asked if she could keep it as a reminder – so again, no way of knowing which serial number it is.  Given the rarity of the instrument, the price tag was significantly higher – serious collectors only need apply.

Those brass resonators must weigh a ton. 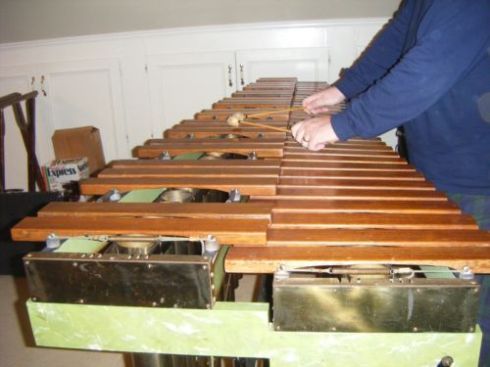 Incidentally, I searched online for Carl Bailey, and sure enough he owned the Bailey Funeral Home in Huntington, Indiana.  The mortuary was opened by Carl’s dad Frank back in 1910 (Steve Weiss’s list of CoP instruments includes a Frank Bailey, who owned serial number 44).  Carl took over the business in 1952 when his father passed away.  In an funny twist, the mortuary was purchased in 1990 – by a guy named Christopher Love.