For the better part of a year, A has been lobbying hard for a Nintendo DS. Apparently all of his friends have one, and it is absolutely essential that he get one (and a copy of Pokemon Black & White) or else they won’t have anything to talk about at school. It’s rare that a day goes by without some mention of when / how he can get a Nintendo DS.

My starting position was “you can get a Nintendo DS when you save up your money for it.” Under constant pressure, and the realization that he will never, ever save $200 from his allowance alone, I caved a bit and said we would pay half if he paid half. He thought this was pretty great, and his goal suddenly became a lot closer.

On Saturday morning, A disappeared upstairs for about 20 minutes. He then slipped this piece of paper under the bathroom door as B was getting out of the shower.

For those who can’t make out the text, here’s a transcription:

“Ah,” I said.  “Did you learn about peace treaties in school?”

He said, “No, I learned about it on Spongebob.”

Of course he did.

In any case, he claims he wants to be a scientist when he grows up, but it looks like he has the makings of a fine lawyer / agent / union negotiator.

While A was working hard on his contract, K was busy with his own project… 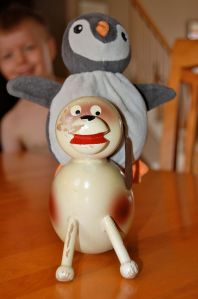