Holy crap, it’s January 15th already – how the hell did that happen?

I learned long ago that making New Year’s resolutions is a fool’s game.  Best intentions on January 1st quickly become forgotten by February 1st, which is probably why I weigh the same today as I did last year, and the year before, and the year before that.

Of course, the start of a new year is a chance to set some priorities and goals, and I’ve come up with a few.  This isn’t meant to be a confessional where I point out significant character flaws and pledge to address them (although that could be an interesting exercise) – rather, just a list of things I’d like to do this year.  Perhaps some of them will resonate with you and we can tackle ’em together.

1.  Don’t procrastinate.  Not off to such a good start on this one – this post was supposed to be written two weeks ago.  In any case, my goal is to get stuff done today, not tomorrow.  I have a tendency to put off the hard stuff to another day, and then the hard stuff grows ever harder and nastier in my mind until I’m awake at 4:00 am worrying about it.  Just do it, already.

2.  Call a friend at least once a week.  With Facebook and Twitter, I feel both more and less connected with friends than ever.  I know a little bit about lots of people, which I mistake for genuine interaction.  I’ve forgotten the value of a good conversation, that an iPhone is an actual phone and not just a social media interface.  So, I’m going to make time at least once a week to talk to friends by phone – an honest-to-goodness back-and-forth conversation.

3.  Write letters and cards.  Similar to above, I’d like to get better at putting pen to paper.  A post on someone’s wall on their birthday isn’t quite the same as a card in the mail – I know I’d like to receive something other than bills and junkmail in my mailbox.

4.  Try one new recipe a week.  I love to cook, but I’ve fallen into the habit of making the same eight dishes over and over.  I picked up a couple of new cookbooks over the holidays, and I’ll be subjecting my family to at least one new recipe each week.  A few lessons at the Urban Element couldn’t hurt, either.

5.  Read at least one book a month.  It’s not that I can’t read or don’t enjoy it – I’m simply spending most of my reading time with newspapers, magazines, and websites.  It should be as simple as leaving the iPhone downstairs at night and taking a book to bed.  I’ve started with William Alexander’s 52 Loaves: One Man’s Relentless Pursuit of Truth, Meaning, and a Perfect Crust, a Christmas gift from B about the author’s attempt to bake the ultimate loaf of bread. 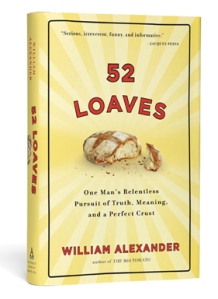 That’s it – five simple items on my to-do list.  I’ve left off the hard stuff – be less cynical, lose 10 pounds of fat, gain 10 pounds of muscle, run a marathon – in favour of little things that should be entirely doable.  The first secret to success is to lower your expectations.