According to a recent study, the average U.S. teen sends 3,339 texts per month.  It sounds like a crazy number, but after watching how my 7-year-old son has taken to it, I’m a believer.

Over the past month, A has gotten into texting in a big way.  It began as a way of passing the time while B and the boys waited in the car – by the end of the week, he was asking for my iPhone every morning so he could text with Mommy.  He quickly figured out how to send pictures and attach video.  I’m surprised he hasn’t asked for an iPhone for Christmas.

If you’re curious about what a Grade 2 kid’s texts look like, here’s a little sample (B’s texts in gray, A’s texts in green). 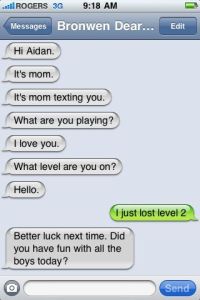 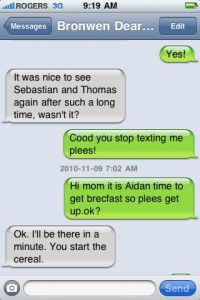 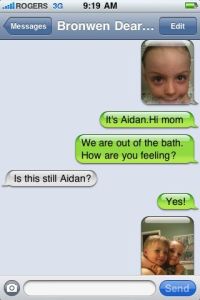