When I was a kid in elementary school, the start of Fall meant only one thing – it was time for chestnut fights.

For the uninitiated, chestnut fights (or conkers, as some people call them), are vicious one-on-one competitions involving chestnuts on strings.  Competitors take turns trying to break the opponent’s chestnut.  While the official game requires the chestnut being struck to hang freely in the air while the other person whacks it with their chestnut, our regional variation called for the chestnut to lie on a cushion of sand.

It is difficult to express the passion my friends and I had for this game.  Every recess and lunch hour in late September and October was spent playing chestnuts.  When we weren’t at school, my brother and I would set off in search of chestnuts, and then painstakingly put holes through them with a large nail before threading them on an old shoe lace.  Once strung with about a dozen chestnuts, we were ready to do battle. 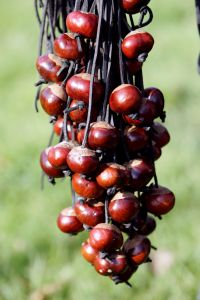 We knew the location of every chestnut tree in Hespeler – the one down by the tennis courts, the one around the corner from the church, the one by Sunnyview dairy bar.  We’d usually meet up with a few kids, and we’d take turns throwing sticks up into the tree to knock the chestnuts down.  Sometimes guys would show up with huge horse chestnuts, and they would refuse to reveal the tree’s location in order to protect their secret source.

The schoolyard was rife with tales about how to make the strongest chestnut.  Some kids soaked them in vinegar to make them bouncy.  Others took the opposite approach, baking them in the oven to make them hard.  I used to wrap them in socks and then place them in a box in the dark recesses of my closet.  After a few months they’d shrivel up and become indestructible little nuggets. Some called it cheating – I called it science.

I’ve spoken to a lot of people over the years, and I’m surprised how few of them have encountered the game.  I haven’t seen anyone at A & K’s school playing chestnuts, so perhaps the game’s appeal was limited to our little pocket in Cambridge.

Last night after school, I took A & K to a chestnut tree in our neigbourhood.  Just like I had 30 years ago, I stepped on the spiky husks to crack them open and plucked out the fresh nuts.  The boys eagerly filled their pockets, and later this week we’ll put holes in them and string ’em up.  I’ll teach them the basics of chestnut fights, and perhaps a new autumn tradition will begin in Manor Park.

ps If you’re a fan of chestnut fights, check out the official World Conker Championships.  This year’s event takes place in two weeks in Northamptonshire, UK.