Upon meeting me for the first time, roughly 20% of people will begin the conversation with “Has anyone ever told you…”, and I finish their sentence with “…that I look like Mike Myers? Yes, it’s been mentioned a few times.”

In fact, I’ve probably heard it hundreds of times over the past decade. With a new Mike Myers film coming out this weekend, the frequency has increased substantially in recent days. I heard a woman at the pool whisper it to her husband as I walked by. I’m greeted with comments like “Hey Mike, I saw you on Letterman last night”, or “Hey Dr. Evil, where’s Mini-me?” Some kids in a Scarborough food court did ask me if I was Mike one time, but I dashed their hopes of a celebrity sighting with a curt “bugger off”.

It’s not that I don’t like Mike – I think he’s a pretty funny guy. He’s not exactly handsome, though, you know? In fact, he seems to take pleasure in appearing as unattractive as possible in many of his roles. Just take a look at some of his more memorable creations… 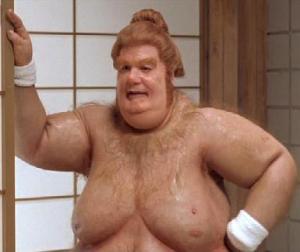 Not exactly the faces that cause a woman’s heart to flutter.

There have been a couple of times when I’ve had the opportunity to get first-hand confirmation about whether I’m actually Mike’s doppelganger. Burt Bacharach played the NAC a couple of times, but I didn’t think it was appropriate to accost him in his dressing room. Instead, I kind of lingered outside in the hallway, waiting for him to pass me and do a double-take. It never happened.

I was a little crestfallen when I saw the first trailer for The Love Guru. It looks like an awful movie, and I can only imagine that sometime soon I will be asked to put on a poor Hindu accent and recite a catch-phrase from the film.

I have this dream that one day, someone will say “Hey, didn’t I see you accepting the Academy Award for Best Actor in a Leading Role on TV last night?”, and I can proudly say, “No, that was my celebrity look-alike, the funny and talented Mike Myers”. It’s time to step your game up, Mike – we’re not getting any younger.

Quiz: Is the photo below me or Mike Myers? The first correct answer will receive a well-worn copy of So I Married an Axe Murderer on VHS.

2 thoughts on “I Ain’t Mike Myers”